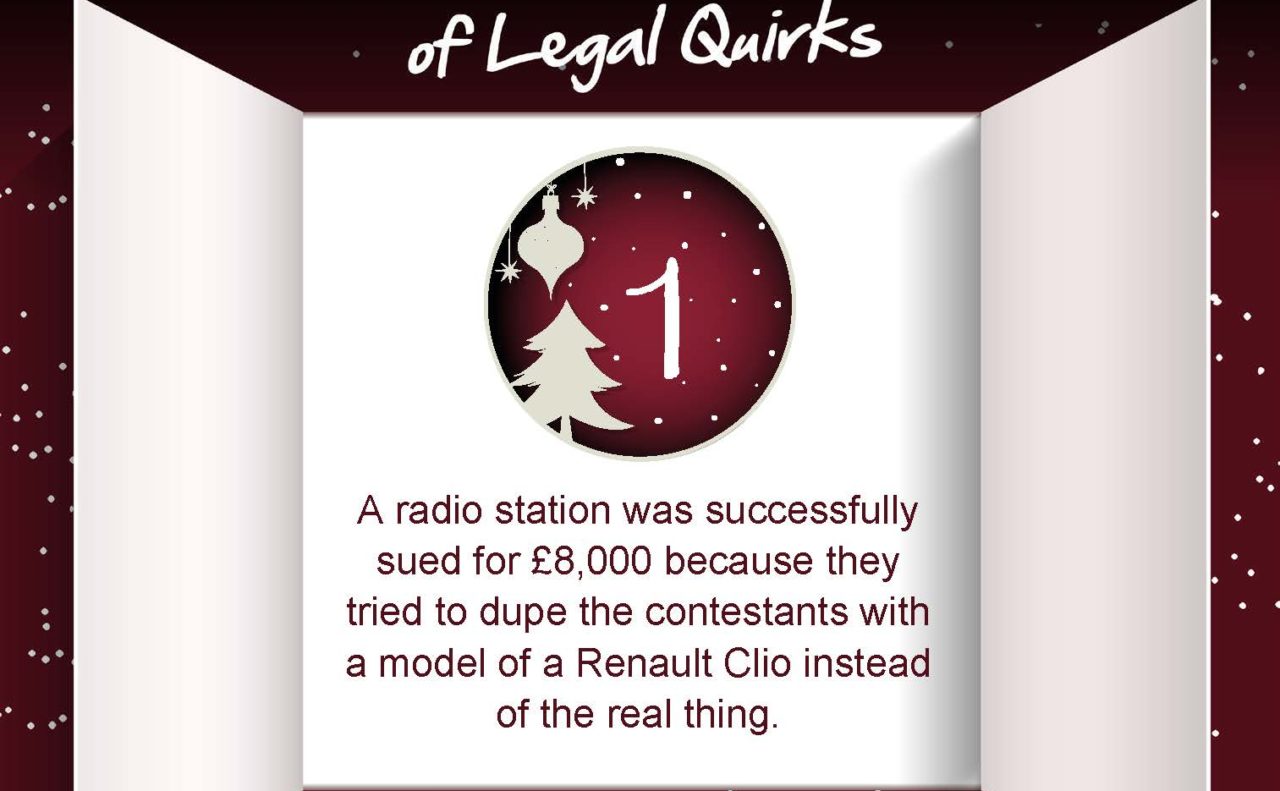 To count down to Christmas the team at Coodes Solicitors decided to create an advent calendar with a difference. Instead of the usual chocolate treats or festive pictures, behind our calendar doors are interesting, unusual and downright bizarre legal facts from throughout history. We have been revealing them each day in the run up to Christmas on our social media channels.

A radio station was successfully sued for £8,000 because they tried to dupe the contestants with a model of a Renault Clio instead of the real thing.

It is illegal to handle salmon in ‘suspicious circumstances’ under The Salmon Act of 1986. The Law Commission haven’t defined what being ‘suspicious’ with a salmon means.

Since 1839 it has been against the law to carry a ladder, plank or pole on a pavement in London. The maximum fine is £500. However, this is allowed if you are loading or unloading or entering a property.

A lawyer once attempted to sue a casino of £20million for her gambling addiction. She argued that the casino had a duty to notice her gambling problem and cut her off.

You could be fined if you jump the ticket queue on the London Underground.

It is illegal to draw on or stamp a bank note.

Flying a kite and ‘causing a nuisance’ can land you with a fine of up to £500.

Since 1994, McDonalds have been obliged to state ‘hot contents’ on their cups due to a women in the USA suing them $640,000 for spilling their coffee onto herself.

Under the Licensing Act 1872, it’s an offence to be drunk in charge of a horse.

Since 1839 it has been illegal to shake a rug in the street after 8am. It’s stated in the Metropolitan Police Act, section 60.

It’s against the law to wear armour in Parliament. Dating back to 1313, this law was originally written in French and is called a Statute Forbidding Bearing of Armour.

It’s against the law the drive cows down the roadway without the permission of the Commissioner of Police.

It’s illegal for common dogs to mate with Queen’s dogs.

It’s against the law to fire a cannon within 300 yards of a dwelling house.

It is illegal to be drunk on licensed premises.

The law states that all beached whales and sturgeons must be offered to the Reigning Monarch.

It’s against the law to import potatoes into England that are from Poland.

It is an offence to be drunk and in charge of cattle in England and Wales.

It is illegal to activate your burglar alarm without first nominating a ‘key-holder’ who can switch it off in your absence.

All unmarked swans belong to the Queen meaning it is illegal to eat them.

It is illegal to keep a pig sty at the front of your house but if your deeds allow, the back garden is fine.

Be careful who you ask for spare change- it is illegal to ask a stranger as it is seen as begging.

Judges and lawyers wear wigs because no-one has bothered to update their dress code for about 300 years.

We wish everyone a Merry Christmas and a Happy New Year.